The 5 milestones of your baby’s development 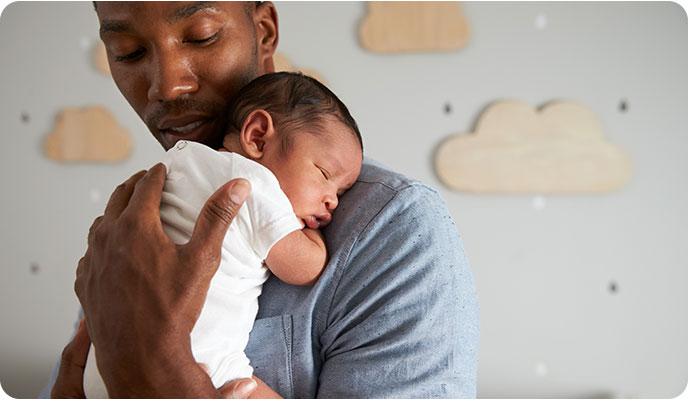 As soon as they arrive into the world, babies grow at such an amazing rate. Not only do we witness their growth spurts, but also their evolving skills. These motor, sensory, and communication development skills are the milestones in baby growth and throughout their first 18 months we first see them looking intently at our faces trying to recognize us and eventually running towards us in anticipation. Happy times!

As eye movement starts to develop, newborns will look at faces and will also respond to sound. Soon they will be making attempts at reaching out to dangling objects and touching different materials. Their mouthing reflexes mean that they will be looking for a source of food and will instinctively latch on to your breast for milk.

By the time your baby is three months old, they will probably be able to raise their head and chest when lying on their stomach, and also be able to grab a finger or object when it is placed in the palm of their hand. Did we hear a collective aaaaaawwwww? (We sure did!)

At this age their visual perception should have evolved, so they will recognize familiar faces and be able to follow moving objects, which means they will understand when you’re coming and going.

They can probably roll from their back to their front and vice versa and they’ll also be grabbing their feet with their hands (and may have a bit of a nibble while they’re at it) – so grab that camera for those cute photo-ops.

At around six months their tummy should be settling so that means it’s time to start to consider weaning. You need to make sure that everything they can grab is clean, because they’ll want to put it into their mouth – on the plus side, this also means that they can feed themselves with their fingers, so be prepared for some mess and have those wipes at the ready for a quick clean.

By this time, you will probably get to see your little one sit happily and play with the toys in front of them - most importantly, they should be able to start putting things in containers which will make mum and dad so so proud! They’ve probably also started crawling by now, which could look rather funny as sometimes they shuffle around on their bums or they crawl like a frog.

At this stage, they might start to make a bit of noise, as they’ll discover how to bang things together, but they’ll also discover their voice and how to say ba-ba or da-da. Try hiding their favorite toy behind your back or under the pot and you’ll probably see them discovering it all by themselves! Soon enough they’ll probably be able to respond to their name too!

Most babies will be crawling quite fast by now – so make sure you don’t have any objects or furniture around where they could hurt themselves. At this stage, they’ll be able to sit up on their own and can probably pull themselves up if they have a piece of furniture to hold on to. Maybe they’ll take their first steps now, too.

When you’re reading to them, if you ask where characters are on the page they’ll probably be able to point to it! They may have also developed a fondness for a specific animal or creature in a book and they’ll probably show their excitement when it’s time to read from there. Reading to your little one is a great way to develop their imagination – take a look at our latest article on the importance of story time to find out more!

Blink and you’ll miss them! Now’s the time when they’ll start walking and before you know it they’ll be zooming past you in at the speed of light (so to speak…). This is definitely a good time to show them how to use the stairs as they’ll be up and down as often as possible. Also, they will unleash their inner architect as you’ll see them stacking things up one on top of the other.

As parents, now’s a good time to cover all power sockets throughout your home as your little one could start poking their fingers everywhere. Apart from putting their fingers into sockets, they’ll also be able to point to body parts – teach them which is which and then try asking them where their foot, ear or nose is and they’ll show you, those little geniuses!

This is also a great age for language development as they might be forming whole words, such as “mama” or “dada”, or describe things in their own words, for example, park might be “pah”.

As every child is different, milestones can take more or less time for some than it does for others. If, however, you have any concerns about your baby’s milestones, contact your GP or health professional.

How to shop smart and save on your baby budget

Travelling with your newborn: What you need to know

Heading back to work after giving birth

Welcome to the club: What to expect from a newborn